So the weekend just gone I attended the first ever WP Contributor Day in Manchester. It seemed like the perfect opportunity to get started and more involved in the community that exists behind WordPress, and when the opportunity arose for a day of coding and contributing, in my adopted home town of Manchester, I jumped at the chance.

I’ve been keen for about the last 6-8 months for contributing to WordPress. But – like most – I just didn’t know where to begin. I’ve a local set up and am okay with version control systems, but that’s about it. I also know I can code okay, but wasn’t sure what sort of level of knowledge was needed, and whether I’d be completely out of my depth.

After a brief talk explaining all the ways in which people could contribute to WordPress from Jenny Wong, a talk by Graham Armfield on the accessibility team and an introduction on how to set up a local Vagrant based system from Mike Little, we then grouped off. Sadly my overconfidence in my set up did show as I was still a little lost, so after struggling for a little while with running commands from on my set up I bit the bullet and decided to join the team who were still installing Vagrant. I caught up and I was finally ready to go.

So after lunch, I thought I should walk before running, and sat down, browsing the Core Trac for WordPress and finding a few patches to test. One of the first ones that took my eye was this one. It seemed like an easy one to test and correct if need be. After 20 minutes of replicating the problem locally, and then testing the patch fixed the issue, I commented and made my first contribution to WordPress, which was promptly Instagrammed. Boom! Job done, and I had a warm feeling inside me that I helped somebody out. 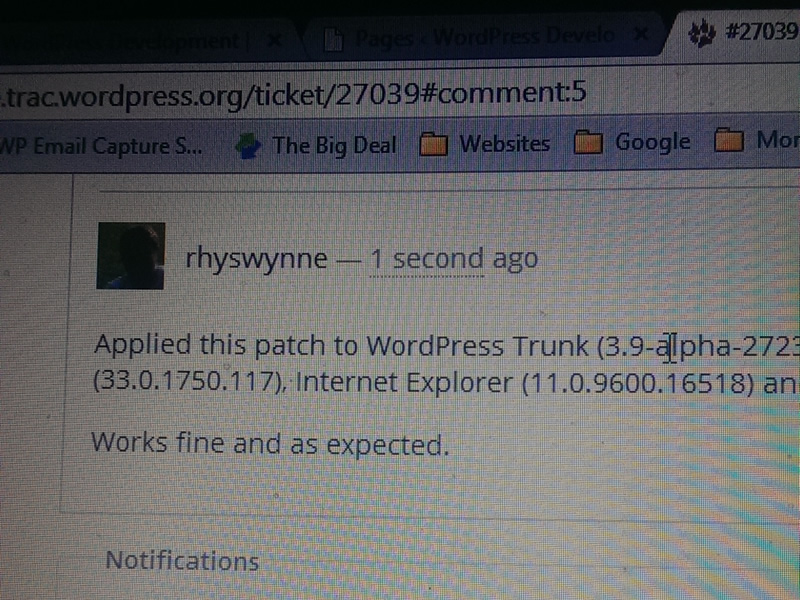 I cooled down the warm feeling with a “first contribution beer”, and then browsed for something else. Ticket 27039 was great, but it was a theme. I kinda felt like I cheated a bit so thought I’d look at a bug in the core I could test. Ticket 23988 provided this – an enhancement in the page that lets people know the comments that an edited comment applies to. A quick test and I could confirm the patch working as such, so another comment and another beer (can you see a trend here?).

That’s all about testing patches, but what about writing one? Ticket 25295 provided that first go – a suggestion that wasn’t patched where additional classes could be added to captions of images. Following a quick read of the guidelines on coding standards I knocked up some code that expanded the shortcode to include a “class” element, and submitted it for hopeful approval. From reading the discussion there’s a good chance the ticket will not make it into the main release, but if it does and if anybody wants to work on it, then hopefully I’ve given them a start.

After one more confirmation of a patch working (26758), we headed for a wrap up, before going to the pub to socialise and discuss the day.

Days like the WP Contributor Day in Manchester was exactly what I needed to get my leg up and started in contributing to WordPress. It was great, and everybody was so helpful. So a big thank you to Jenny & Mike for organising it, and I’m probably heading to the second one all being well. And so should you.

10 thoughts on “The First WP Contributor Day in Manchester”