If you remember back to my Goals of 2013, one of my goals is to save a bit of cash. This manifested this month with my monthly challenge of giving myself a cash amount for what I will save. One way I’m doing this is by avoiding fruit machines (yeah it’s a habit I’ve kinda dabbled in since my University days), and instead, when bored, playing on quiz machines instead.

In truth, I’ve always liked a dabble on quizzers in my time, a small guilty pleasure with my pint. In fact I’ve probably played most games on quizzers during my time spent in pubs, so I’d like to think I’m pretty good at them, and know what makes a good game. As such, here’s my three favourite quiz machine games ever. 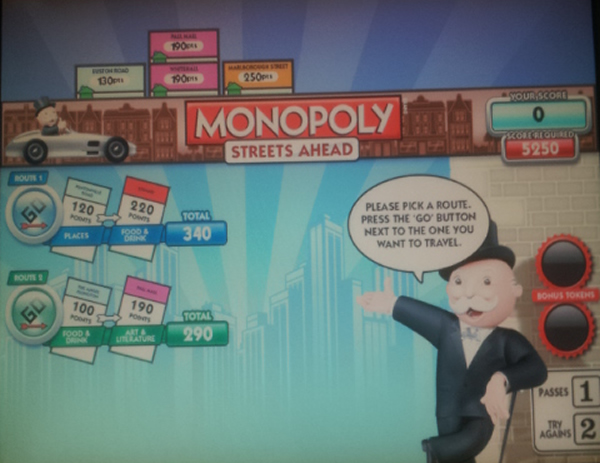 You’ll notice a theme with all games on this list, in that they have a fairly defined end game. Games such as Cluedo you can play for hours because the machine will eventually screw you over, rolling numbers on your dice that will miss all the good squares. Monopoly is another game, with early versions not even telling you the points you have to reach before the cash prize.

Monopoly: Streets Ahead though is one game that takes the classic Monopoly and provides you with an end game. For one, they get rid of the dice entirely. Instead you have to pick properties you would like to win. Answer all the questions on a variety of subjects in the round to bank the points. Get over the number of points and you enter the end game, which you’re nigh on guaranteed to win a prize.

You can also enter a “shop”, which gives you the chance to exchange points accumulated up to that point for properties, tokens (which give you perks) and extra passes and try agains, and there’s a couple of skill games.

In short, it’s quite a fun quiz game, and probably my favourite quiz based quiz machine game. It is fairly easy to win something, though does have a habit of throwing up “Hotel & House” repairs towards the end, which is a bit screwy, but not irrecoverable from. The fact that this screwy feature exists knocks it down from second to third.

This game is quite fast, but quite easy to win a pound or two on. The game features a 16 square grid, with 8 right answers to a question, and 8 wrong answers. You need to find all 8 correct answers. This game does have a habit of throwing up some nasty rounds early on (one in particular is “Find 8 Cigarette Brands”, as somebody who has smoked a grand total of one cigarette and one cigar in his life, it’s tough!), but overall they are pretty fair.

What’s nice about this game is that the random, but welcome, feature that after the end of rounds, your lives and assists (“Eliminator” which eliminates 2-3 wrong answers, and “Find 1” which finds one correct answer) are refilled, which is always handy when the random difficult question shows up.

The only thing that lets this game down is the speed of it. For 50p, you are probably getting a minute or two of game time. It’s frantic, particularly with the timer which speeds up at later levels, it could do with being a bit slower I think, but overall my usual #2 choice if #1 isn’t on the list. 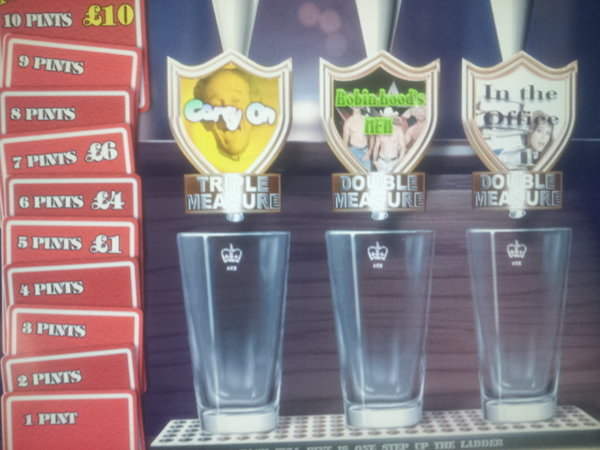 1. Pints Win Prizes (ideally, the second edition, but the third is fine as well)

And lo, the best quiz machine game, in the world, ever is Pints Win Prizes. This game has a £10 jackpot, and is your basic hangman game. To win the game, each puzzle gets you a pre-determined amount of beer into a pint glass (or, if you have a “Happy Hour”, a small amount in each pint glass). Collect 10 pints to win the jackpot, but various prizes are available for complete pints (starting from 4 pints). Bonuses are the usual bonuses you get with hangman games (Pass, Extra Letters, Complete Phrase, Extra Vowels and Eliminator), and you get 6 lives. You can also “Pull The Barmaid”, which will get you 3 pints straight off.

In short, it’s fairly straightforward to get decent wins, and also really good fun. The diverse range of categories means most rounds have at least one category that you’ll like.

If you can find the second version of the game (green bar, rather than blue), then play that. It has far fewer categories than the third one, and doesn’t have as quite a difficult bonus round when it wants you off the machine.