Frank Sinclair said it best with these words – “We have achieved the unachievable”.

I rarely talk about Colwyn Bay FC, the claret and blue coloured love of my life, on this here blog. Usually when I show my passions with it then I rant on here (it’s a personal blog, I’m allowed). The last rant was back in January, whereby I bemoaned the “Crisis” at the club. In short, I wrongly stated a few things, which were:-

At first, it was roses and petals and everything was lovely. Two great draws away at promotion chasing Guiseley and Altrincham, followed by a wins against Corby Town and Harrogate Town saw Colwyn Bay edge closer and closer to safety, but a defeat at Histon (that still annoys me to this day, hence why I struggle to write about it on You’re Supposed To Be At Home saw the season unravel. Chance after chance was spurned, and then following a defeat to already relegated Droylsden, many fans saw that as the end, as with six games to go – it looked bleak, as although we had 3 games in hand over third from bottom Corby Town, a dramatic upturn in form was needed to escape.

And, lo and behold, a lifeline was thrown.

Colwyn Bay scraped a win against Gainsborough Trinity. I remember following the game on the Bay forum like a ridiculously hungover stalker on the train home from BrightonSEO, shaking in a combination of nerves and acute alcohol poisoning, and it sounded like we weren’t going to win. Gainsborough were all over us, and we were defending too deep, and they were certain to score. Not so, albeit it took a 95th minute wonder save from Chris Sanna to claim all 3 points. People said our season turned on that save. I’m inclined to agree. 3 points in the bag and 6 points with three games in hand due to Corby’s loss with Workington meant that the table all of a sudden didn’t look too bad.

Fast forward to a Tuesday night, and a cobbled together night out at #Mancdigibowl. I still wasn’t convinced that we’d get out of it, so for the first time in a while I had my phone switched off as Colwyn Bay made the long away trip to Brackley Town, a promotion chasing side that if they won would guarantee a spot in the playoffs with games to spare. Take a draw and the dream is still on.

Half time, we were 3-0 up. Brackley pulled one back but all of a sudden we were now 3 points behind Corby with two games in hand. Oxford City at home was next up, two days after and this game I was locked in my room – refreshing the forum and checking Twitter like a madman, as a win would put us ahead of Corby on goal difference. After we were drawing at half time, it was looking unlikely, before two quick goals early in the second half saw us win 3-1, and a gap that 8 days before had seemed substansial was now gone:-

Corby taking the place in the relegation zone, and displayed a class that you don’t see higher up the league system:-

@ColwynBayFC congratulations on moving out of the relegation zone, you deserve it

Credit to @ColwynBayFC though. It goes to show that points on the board mean bugger all #steelmen

The work, and the games didn’t stop though. Workington away on the Saturday was next up, and we were afforded the luxury of BBC Radio Cumbria who were covering the game. Another 1-1 at half time was converted into a 2-1 after 90 minutes, and could’ve been more when Workington inexplicably brought their keeper up for the final corner of the game to try and salvage a draw. Following a clearance, Shelton Payne was unlucky to score right at the death. A small niggle in a fantastic performance (especially as Shelton’s performance towards the end of the season has been phenomenal). Due to Corby’s win at Gloucester and Histon’s draw to Boston United meant a trip two days after that to Bradford Park Avenue would see a win take us nearly safe, and definitely safe should results go our way on the Tuesday. This happened:-

Another 2-1 win, the fifth win in nine days, saw us nearly safe. Histon grabbed a draw against Solihull Moors the day after, which meant that a win or a draw against Gloucester City on the final day would see us definitely safe.

By now, people were starting to take up and notice the achievements of the Bay, and the gate for the game swelled to a massive (for us) 633. The town were finally proud in their football club, and many fans (myself included) took to fancy dress to celebrate the occasion. 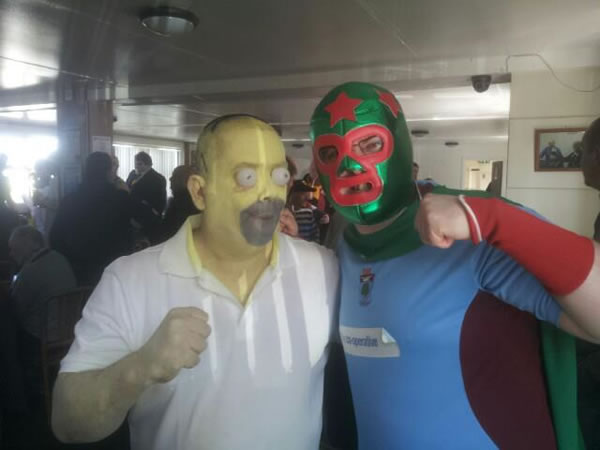 But would a celebration be premature?

Gloucester City were spirited, with a team struggling for players, and the City faithful were a good laugh, but Colwyn Bay completed their amazing turnaround in form by winning 1-0, to finish 5 points clear of the drop. For once the result didn’t matter, but not that you’d notice with the pitch invasion right at the end. With all due respects to the achievements of last season, this season felt something a little more special.

I cannot describe how dejected I was with my football club in mid April, with trips to Skelmersdale United, rather than Stockport County on the cards. In short I wanted the season to end. Now, I can’t wait for the new one to start. Hopefully this has been the shot in the arm the Bay needs, and the town begin to get behind their team more.

And to all my friends, I apologise profusely, to Cass, Shane and Alex, as well as my housemates, who have seen the brunt of my “OMFGWTFHAVEWEDONE!” in the last 2 weeks. Not one of them cares a single bit about football (well, Shane did quite enjoy his trip to Vauxhall Motors on Boxing Day). Think of this blog post as my final say on the matter, as now I’ll bloody shut up about it.

In short, we achieved something as a football club incredible.

You see, very few teams in a season go on a six-game winning streak. Very few teams begin that winning streak from 20th in the table. To win six games from 20th in the league in 15 days is unheard of*. Players showed a monumental effort to play these games, with cases of players having to stop on the drive home to vomit out of the window as they were so banged up, it is unheard of. This isn’t the Premier League, where players can be rested, it was largely the same 11 players throughout the run (with possibly one or two changes, due to suspensions). Furthermore, the players are all part time, meaning that many after arriving home at 2am, would be up the next day to earn a living.

Just incredible really. I’m so proud of what they have achieved, and am proud to say that my post in January was wrong, dead wrong. Bring on next season, as I would say we completed The Great Escape, but even then, Steve McQueen didn’t quite jump over the fence.

* Through reddit I did a bit of research, and managed to find that towards the end of the 2000/01 season Canvey Island played 7 games in 14 days, winning 4.

2 thoughts on “Achieving the Unachievable”